Note: this is a transcript of the same Linkedin article published on December 2, 2016

I have recently attended a very interesting meeting with pretty nice managers from a great Finnish company, where I was asked about this piece of discussion. Because we had more subjects to talk, I have the feeling I likely didn’t explain my point of view as properly as I would have liked.

And as I think this subject is of general interest and deserves to be shared with all of you, let me explain how I see the difference between management and leading in an easy way, so that it will be easily understood.

Let’s explain a little bit more my beliefs, taking advantage of an already existing article posted time ago (spanish), and extending to the leading types I was asked about.

If you have read Drucker’s work, I am sure you have it clear enough. However, there are other authors whose focus I like too. In fact, if we have look to Kotter’s article in HBR «What Leaders Really Do», he says:

In the same line, Fred Kofman says in his «Metamanagement»:

Having a look to «Functions, competencies and managerial skills» by Pérez J.A. (Madrid: Escuela Nacional de Sanidad 2012), it also explains it pretty well. I think this video will help you to a better understanding (english subtitled):

I’m convinced that in a natural way, you already has realized that

both concepts are not the same nor substitutes, but they complement themselves.

On the other hand and concerning Leading styles…….well, I believe no person has just a «prototype leadership style», but a mix of them.

I remeber when I was trained early my professional career at Ford motors company. We were learning about «Building of efficent work teams» (1995), and leadership styles was an important subject. We were explained about the X and Y theory by Douglas Mc Gregor (X = autocratic, «authoritarian»,and Y= participatory, let’s say «democratic»).

Not making it long, conclusion was that a correct leveling between both characteristics were need to achieve an efficient leadership.

Nowadays everybody is on the wave of leadership, coaching, motivation, engagement… Well, maybe too many people that write management articles, but not enough actual managers in industry/services as we would desire….. 😉

However, from my point of view, with the «putting a name to everything» current trend, maybe we are missing the focus and somebody can be a bit confused.

So we can see lot of adjectives refering leadership, such as «Coaching», «Pulling», «Pushing»…… and at the end, I’ve the feeling that all of them try to describe the difference between how the leadership was mainly in the past (and still today), focusing just in results, and current theories about focusing on how to achieve people doing their best to get the best results…

Again, and after more than 20 years in several and very different organizations, my expertise drives to me to consider that no extreme is the correct, but a mix of the theories

From my point of view, every situation requires a different treatment.

In fact, I’m more in the side of the coaching and pulling, since I «….clearly define roles and tasks of followers, but seek (I) their (my) input and suggestions too. Decisions are still made by the leader, but the communication style is truly two-way» (paragraph taken from «money-zyne.com , Coaching Leadership Style”).

In other words, inspiring and motivating others

But I confess that, in regardless I fell personally fine with this way, and knowing it has lot of strengths, you must know that it also has weaknesses……so I don’t want recommend it without explaining you other possibilities

For a better understanding on the matter, it’s mandatory to have a look to how Daniel Goleman explain six leadership theories and styles (Emotional Intelligence: Why It Can Matter More Than IQ, 1995), summarised in the following matrix: 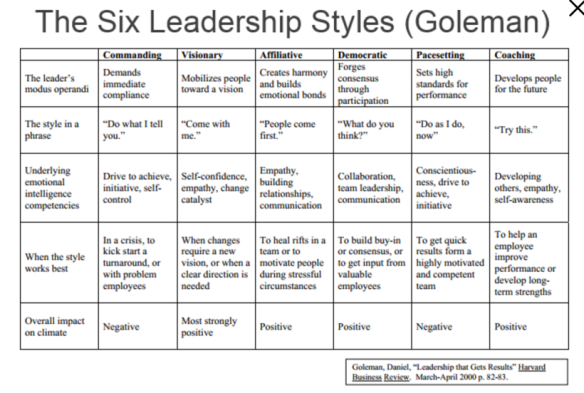 As you can see, there are especific situations where every theory can work properly, trying to be more efficient from a pragmatic perspective.

From my side, I consider myself as a «weighted average», making an emphasis on those that have a positive «overall inpact on climate» of the organization. It makes me happier 😉

Have a nice weekend…..